A recollection of what has happened in the last seven years since Nepal became Federal Democratic Republic. First of the two part blog series has some facts with some negativity. Part two will be more difficult to write – as the hope is to get a better and brighter picture.

Expectations were high even in 2008. Nepal came together and made history with Federal Democratic Republic country and the new constitutional assembly. Sure, we removed the monarchy in hope to better the political structure that we thought was more akin to feudalism under the then ruler. Introspection reveals a neglect and a disaster. Members of the second Constituent Assembly, elected in November, chose S Koirala of the Nepali Congress (NC) party on February 10 as the fifth prime minister since Nepal held its first democratic elections six years ago. Disclosure – I am inclined towards democracy, neutral towards the old monarchy, and despise communism.

Seven prime ministers in seven years. Seven head of state, elected (and/or selected) to bring the country out of tragedy and darkness.  GPK was experienced, skillful and capable leader. However, he was inadequate and incompetent for the time, corrupt, greedy, and old.

Koirala ruled the longest as five-time prime minister in the democratic era after 1990, and by that token also made more mistakes than others, besides earning the animosity of the mainstream left which opposed him in Parliament and on the streets. Koirala can take some of the credit for the advances made during the dozen years of democracy till 2002, including the advance of community forestry, press freedom, the FM radio revolution and the brief interlude with local government. He was a true believer in open society. And yet, he was party to the ills that dog us to this day, from energy shortage, static economy and the impunity that has spread like wildfire. Clearly, Koirala was unable to come to grips with the newer challenges beyond pluralism, posed by identity assertion and economic globalisation, among others.

The next four prime ministers were from Communist Parties. Though not a big fan, ours is one of the few nations which has the leftist participate and win democratic elections. Among the four PM, it was B Bhattarai from whom the expectations were pretty high. He failed. The remaining three communist leaders are mockery at best. In my personal view, Francis Underwood could learn a lot from PK Dahal on how to lie; and MK Nepal on how to become head of state even after loosing the election (plot line for season 4)

Autumn 2003, I found myself at the same university which shaped up Dr. Babu Ram Bhattarai, the chief Maoist ideologue. Now, popularly known as ‘Laldhwaj’ among his comrades, Babu Ram Bhattarai did his PhD in Urban Planning from Jawaharlal Nehru University, New Delhi (1986). This famous Leftist bastion drew him to the communist fold despite his earlier fondness for BP Koirala and even GP Koirala. Taking a U-turn from his Nepali Congress leaning in JNU, he wrote a thesis, replete with leftist polemic and revolutionary rhetoric, now available as a book- “The Nature of Underdevelopment and Regional Structure of Nepal: A Marxist Analysis.” He has himself admitted, “I learnt the ABC of Marxism in Delhi’s JNU.”

Then came the chief justice of Nepal, who somehow managed to get the government going for sometime. and now we have a bachelor as prime minister. Nothing against his bachelorhood. Just too many incapable politicians around even in the new CA.

Next on the list is Plane Crashes. Here is a list of accidents and incidents involving commercial and non-commercial [NC] aircraft in Nepal from 2008.

For comparison, India which is around 21 times the size of Nepal, and well with 1 billion+ population had 10 plane crashes from 2008 onwards (till 2014). Next neighbor, China had 7 accidents. Well to be honest, we can exclude the three airplane crashes in Kathmandu, TIA, for being one of the worst air strip for aviation and landing a plane. Still, We have one accident every 8 months. I am horrified to board a plane.

Before I begin ruining my thoughts of how I miss my friends and family, here is a small excerpts from New York Times, Feb 21, Opinion section. A very strong word – Social Mobility, and how the authors compared wealth and knowledge among the haves and not haves – around the world. Authors talk about Indian (Nepali) society and how our cast system and religion has prevented the social mobility. One question,  is why all the prime ministers in Nepal are from upper class?

When you look across centuries, and at social status broadly measured — not just income and wealth, but also occupation, education and longevity — social mobility is much slower than many of us believe, or want to believe. This is true in Sweden, a social welfare state; England, where industrial capitalism was born; the United States, one of the most heterogeneous societies in history; and India, a fairly new democracy hobbled by the legacy of caste. Capitalism has not led to pervasive, rapid mobility. Nor have democratization, mass public education, the decline of nepotism, redistributive taxation, the emancipation of women, or even, as in China, socialist revolution.

That said, here is the number of people in last decade (and so on) that have left Nepal and gone out for education for work. Most of them are from Middle Class, Upper Middle and few from the Elite Nepali Society. This probably is not selection bias, on my part, as I could very well not choose my family and friends from a broader group of society hierarchy based on economy. Disclosure – I represent the middle class family in Kathmandu. Coaxed  into more studies and less play – with broad shoulder that could carry a heavy back pack filled with books day-in-and-out.

Four of my first cousins are not in Nepal, gone outside for education. I am not good with extended family (don’t remember them) but seven among all the second cousins I know are outside Nepal.

School, High School, and then School of Medicine – some of my close friends are outside Nepal pursuing higher educations and/or working with really good future prospects. Some in pursuing medicine, some in public health, and some in everything else, that I cannot understand. We had a small eight boys group in school which represented the small-dull-nerd group (seriously). Five of them are outside Nepal, settled and prospering. High School saw a huge magnitude of friend circle/s, but among the closest friends – 10+ are in USA, few in Europe and Australia. Then unto medical school, we had 45 of us, and around 6 are doing (or will soon) their residency here in USA.

Third on my list is how my friends, family and most of the neighbors have at least one of their family members aboard. I have a small map below, which puts my place in the center, and all the houses that surround the one that I live in. They all have one thing in common, either their daughter is married to someone outside Nepal, or son/daughter is outside Nepal for further education, or the whole family got into DV Lottery.

The middle class exodus is in the rise, specially after the 2006/7 pseudo(corrupt)democracy. This being the intellectual herd (personal opinion) Not saying that there aren’t any left in Nepal, but a big portion is going out. I know (hope) they will return one day to help build Nepal a better place. Disclosure – I myself, at the moment am in USA, till the end of April 2014.

Somehow, I feel that our social culture dictates this. Any parents would want to see their kids grow up into better life. Educate them, and see them work in better position. When the times were difficult, my grandfather migrated from the hilly regions in Nepal to the fertile flat lands in Terai. My father migrated from this fertile agricultural society to the capital Kathmandu for service based economical model. Now I take this progress,  few steps further. Its either sending your kid to a rich, developed nation or coaxing him/her into a respected profession (by time/place)- a doctor, an engineer etc.

Seven years of FDR has done nothing to reduce the Power Cuts. Below is just a small list of power cuts that we had during the peak season of misery. I wanted a more elaborate 12 month graph for seven years, but I couldn’t find any materials on the Internet. I did mail to the NEA asking for the information. Putting this for another post. 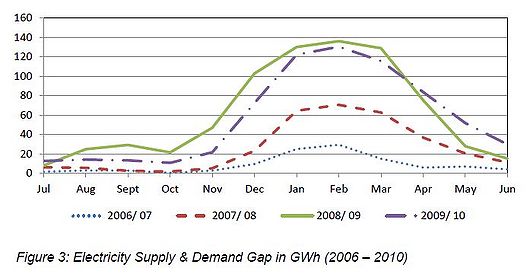 One thought on “FDR – ministers, crashes, and cuts”