Nepal is poor. Everyone knows this. How poor? has a convoluted and wary answers from variety of well known and reputed organizations that may and may not represent our government. So when mother and I discussed about the poverty in Nepal few days back, It got me thinking to search for answers. It isn’t black and white, but here is the gist of it.

Poverty is the state of one who lacks a certain amount of material possessions or money. Absolute poverty or destitution refers to the deprivation of basic human needs, which commonly includes food, water, sanitation, clothing, shelter, health care and education. Relative poverty is defined contextually as economic inequality in the location or society in which people live. Now, the World Bank defines extreme poverty as living on less than US$1.25 (PPP) per day, and moderate poverty as less than $2 or $5 a day (definition copied from Wikipedia.)

Although the most severe poverty is in the developing world, there is evidence of poverty in every region. The main poverty line used in the OECD and the European Union is a relative poverty measure based on “economic distance”, a level of income usually set at 60% of the median household income.

what is poverty in Nepal?

As per Wikipedia, the data from 2010 shows that the percent of total population living under the poverty line of 1.25 USD is 24.82 percent and those that live under 2 USD is  57.25 percent of the population. Somehow Nepal is still in post conflict transition, seven years after the ten years civil unrest came to an end. World Bank  page dedicated to Nepal, reports a survey saying Nepal has performed extremely well in reducing poverty as the percentage of poor dropped to 44.2 percent of the population in 2011 from 64.7 percent in 2006  – 4.1 percentage points per year.

The poverty line threshold of $1.25 per day, as set by The World Bank, is controversial. The Economist article from 2008 points out the exact reason, why I do not personally feel comfortable with 1.25$. Basically, its very hard to peg a fixed number in relation to the growing inflation. To counter it, World Bank also has an counter-criticism from January 2010 article here. I do not personally understand economics very well, so my say is

but is this only one scale?

Income is just one way to measure poverty, and a particularly tricky (and narrow) way at that – so says Notre Dame economist and National Poverty Center research affiliate, James Sullivan, who believes that to measure poverty strictly by income fails to accurately reflect people’s true economic circumstances.

According to UNDP’s Human Development Index (HDI) 2013, 44% of the population are still under the poverty line. The HDI is based on multidimensional poverty measurement system. The system is an alternative to income-based poverty estimates. The population living in poverty in Nepal is higher compared to other countries in the region with employment to population ratio in Nepal is 86.4%. The report also reveals that child labor in Nepal is relatively higher than other SAARC countries. More than one third of the children between the ages of 5 and 14 are engaged in economic production. A comprehensive Wikipedia report on HDI of the world is available here.

wait what about remittance?

As of 2010, the total remittance value in Nepal is worth around $3.5 billion. In 2009 alone, the remittance contributed to 22% of the nation’s GDP. The Datasheet compiled by World Bank (available here) with Datasheet from the link on Annual remittances inflow (available here). [Accessed on May 12, 2013]. Detail workup on Nepal’s remittance culture is also found here. Newspaper article from Himalayan Times (here) from April 20, 2013 states an increase in global remittance in developing countries by 5.3% to $401 billion in 2012 compared to a year before. India remains largest recipient country in world, receiving almost $70 billion in remittance in 2012. In Nepal’s case, remittance income accounts for a large chunk of it, earned by many hundreds of thousands of largely unskilled Nepali workers.

However, considering aspects like job safety and security of migrants workers, we have no safe bet to say that this is a long term commitment. As an rough estimates, there are about 400 to 500 Nepali cohort leaving this country every week. Most go as migrant workers and some for further education (who somehow don’t return back). As a personal experience, there were about 60 people line outside one particular foreign embassy on May 13, 2013. I also have a picture as a proof, but will withheld the detail information for next blog article.

Nepal as present has an annual growth rate of about 4.6% (estimated 2012) and per capita income of about 1000 USD ($1300 as per CIA World Fact book). The Central Bureau of Statistics has estimated Nepal’s Gross National Income (GNI) at $721 per capita for the current fiscal year. GNI is an important measure of the average standard of living of a country’s people. Out of the SAARC Eight, Nepal ranks with other three countries as LDCs (Least Developed Country). Just throwing out another number here – The unemployment rate in Nepal is about 46% (as per 2008 estimate in CIA World Fact book). In short – Nepal’s economy at the moment is in shambles.

MDG 2015 – One – Eradicate Extreme hunger and poverty. where are we?

— — On Poverty – Target likely to be achieved

The country’s current poverty level, according to Nepal Living Standard Survey III is 25.2 per cent, suggesting that it has been reduced by 5.5 percentage points since 2005. However, the incidence of poverty in rural area (27.2%) is almost double than that of urban areas (15.46%); Far west development region has 45.6% poverty against 21.44% in the eastern regions. Similarly poverty incidence of Dalits is 43% which is four times higher than Newars and Brahman. Remittances are one of the main contributors to poverty reduction, in addition to the significant increment of real wage. Sustained poverty reduction is possible only with higher levels of employment generation through greater investment and growth and private sector is one of the key players. Agriculture should be revived for young people and workers to return from abroad. (copied from UNDP.org)

— — Hunger – Target unlikely to be achieved

for more info on Nepal’s MDG reporting regarding hunger – go here. In short the answer is – NO it won’t make it up for this indicator. For more – download the pdf here. Poverty and hunger are interconnected concepts, and in both fronts Nepal has difficulties to meet MDG goals. As they are multidimensional issues, especially hunger, country’s development in all fronts are essential.

Targets (in case you need numbers this is Nepal’s target)

Indicators (these are the indicators, which tells us if we reach our targets or not)

so what are my poverty indicators?
(personal/perspective)

Well I may be totally wrong here, and my perspective may overshoot my logic to some unknown Olympia, but these are the stuffs I think, decides if your poor or not.

lastly, after the above four – Consumption > Income – If you spend more than you earn, then your poor. Seriously. Some good indicators of poverty 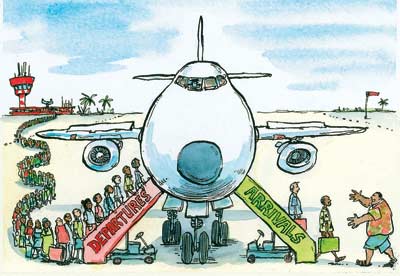 so how poor is Nepal?

very poor. On its own, Nepal cannot or would not be able to develop at fast pace. Given the stance of unknown remittance future, and high brain drain, there is a convoluted prospect of developing Nepal. I do have faith, that given the political stability Nepal can further reduce poverty, but this is a huge faith of leap.