Took me around three hours, but I finally updated to Windows 8.1. The following few hours were about knowing what has changed in this widely used operating system. Initial thought – nothing so interesting but definitely in the right direction.

I was an avid OS X fan for a long time. Until June of last year I loved my MacBook. It had all kinds of small tools and tweaks that made my desktop/laptop experience easier. Most of my digital time involves reading internet articles, some email work, and image and video manipulation. These days I use APTANA experience with Notepad++ and Firefox. I don’t have a fix browser preferences, but I loved reading list function of Safari until last year, but now Chrome/Firefox are suffice. I do not use web browser based email and usually prefer an offline experience. Mail app in OS X was great for me, but since Windows 8, I use the default Mail for Windows.

On the social front I am more tuned with Facebook, Twitter and LinkedIn. Twitter being the least of my favorite, because I have yet to find a decent app that can handle tweets for me. I use Picasa for basic Image manipulation and sorting, and Adobe 5.5 for anything bigger. Together it lets me forget iPhoto from Apple world. I have tried using Windows Media Player and Music app from Windows 8.1, but can’t leave iTunes. What I desperately need is a free video making software, like the iMovie for OS X. I however, increasingly am using Calendar and People Applications in Windows 8 these days.

I have a heavy cloud presence, with most of my documents scattered in Box, Dropbox, Drive and SkyDrive. For documents, presentation and spreadsheet – I use LibreOffice 4.1 and KingSoft office suite. Each have definite purpose. So with these basic use, I went on to test the new OS. 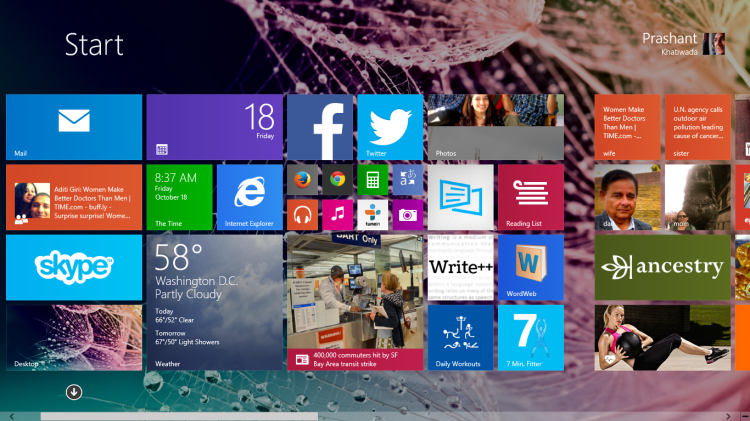 I do not have any pictures to share during of install process. Early morning, my Windows 8.0 Store suggested that I get the free upgrade, so I pushed the button without any preparation. It took about an hour to download and then two more hours to install, during which time, it rebooted twice. When I was done, there was a File Folder name [Windows.old] occupying around 3 GB worth space. My genuine Windows 8.0 product key worked, and so did the Media Player Codec and Media Center Additional pack keys.

There are few applications that come with the new coat. All of them are in the new Tile/Metro Interface and few looks promising. 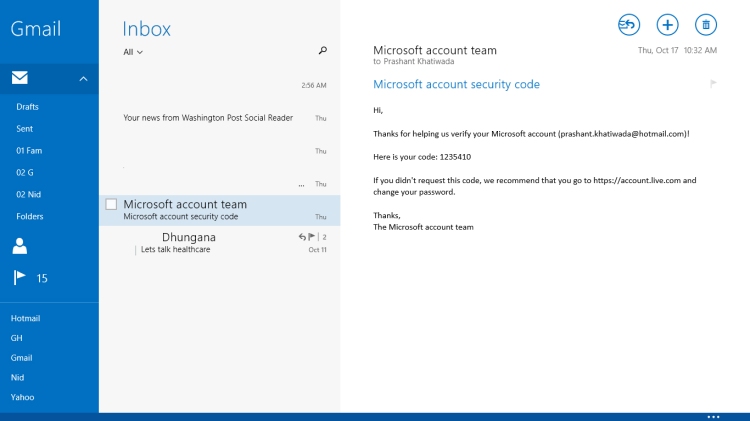 Mail application has finally upgraded to something workable. Attachments are better handled and IMAP functions are up to date. Google, Yahoo and Hotmail are all in one place. I am still syncing the Favorite folder, there is a Flag feature, and most of my emails are backed up and available.

People application has been face lifted and now I can assign images to individual contacts. Its more responsive but there is still no way I can create a group as in Windows Phone. There is permanent search bar present in the right upper corner. 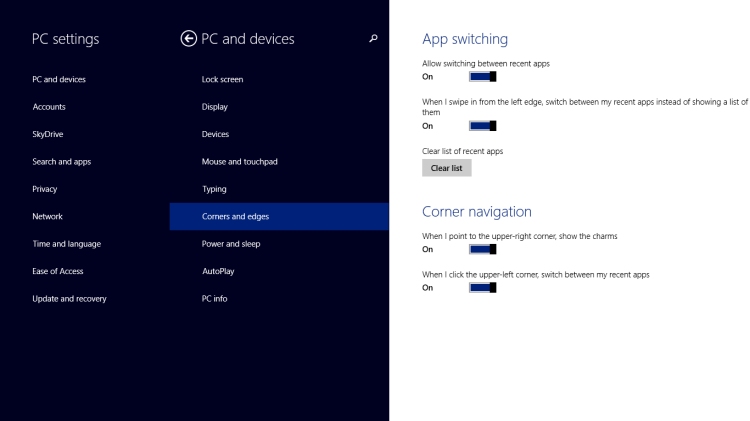 I am very skeptical about these two updated technologies in Windows 8.1. Both if implemented correctly can be very profitable for Microsoft. But for users of Windows operating system it represents that thin red line between good and bad.

Bing has come a long way, and its integration in Windows 8.1 is fabulous. However, things are still far from over, and the current OS level integration is not enough. I think it still needs some tweak up, and the results it provides are not in par with google search. I remember few years ago, Google had this desktop search program which was awesome. Its folded now. Similar is the concept of OS X spotlight. One stop for search. Smart Search is progressive, but my search of “Kathmandu” “prashant khatiwada” and “Durbar Marg” gave mixed results. The combine search results is nifty but I need Bing to do more.

SkyDrive is future – only if done right. SkyDrive integration is seamless, and its online/offline concept of file/document saving is wonderful, and many if not all can benefit this. I am particularly fan of Dropbox because, everyone I know uses this. Imagine what will happen if Windows 8.1 is able to penetrate the “Everyone I know” group. That said, I have yet to use the full potential of this SkyDrive Integration, and probably would require a Windows Phone also. As of today, I only use it to store handful backup copies of my personal documents,.

What is still missing

Here are few things that I think requires some (if not all) attention from Microsoft when they are working with Windows 8.2 (or the next version).

I often wonder why Microsoft didn’t come up with this. They still have the Word Pad version for Classic Windows Interface, what is stopping them from creating a METRO (or the new interface) version? I know that there is a OneNote app, but it has few offline limitations, that is not so good rural Nepal. The Application, for limited time is a free offer.

I was with Mac OS X 10.1 all the way up till 10.8; and have seen a fair share of Ubuntu from 4 (Warty Warthog) to 13.04 six months back. Both follow an incremental release cycle, improving upon bits and pieces. OS X improved upon the foundation laid out a decade ago, and now is as solid as ever. Ubuntu is still making its foundation with 14.04 anticipated to be the ground work. Microsoft started a year ago with its ground work, and is building upon it slow. It needs to cover up fast and pace it self if it wants to stay ahead. Windows 8.1 is a little ahead in terms of unified search and cloud integration, what it lacks are fundamentals like a photo and video app. I am no enterprise customer, so my perspective here is limited to personal use.

What would make a better Windows OS 8.1 for me would be an addition of iLife like suite for Windows, a basic note taking application, and a to do applications all linked up to SkyDrive (or given permission with any other cloud services).

Mine is a personal laptop, 17 months old. No touch screen, limited i3 intel processor, and a mere 4GB RAM, coupled with 5400 rmp Hard Drive. I do not use Bit Locker, and neither does my machine have that always on (InstaGo or something like that) feature. I have yet to use many features of Windows 8.1, but this post gives the first 24 hours scenario. I do not do Homegroups and haven’t played any games in Windows 8.1, yet.

I installed it on October 17, as an upgrade to Windows 8. NOT A CLEAN INSTALL.